‘Shakespeare in Chicago’, a tribute to the father of the English language 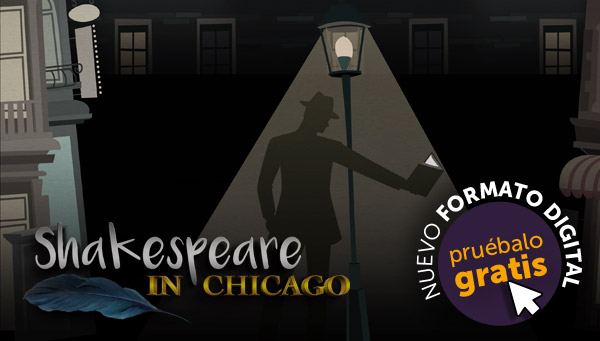 No English child learns English without studying Shakespeare and, in fact, there are many methods of teaching the language through the playwright’s work. With Shakespeare in Chicago, Face 2 Face offers a fun and very stimulating way of introducing students to this great author through his most emblematic and well-known plays. An excellent introduction to Shakespeare and the important role he plays in the English language through his immortal characters.

Face 2 Face, protagonists of the biggest robbery in the history of English language theatre

Every day there are robberies all over the world. But with Shakespeare in Chicago, the robbery takes place in your own classroom, in front of all your students.

Whacko and Dick Vizioso, who are not only brothers, but also Chicago’s most clumsy gangsters, have robbed what they think is a bank but suddenly they find that their loot is comprised of various copies of  The Complete Works of William Shakespeare. The only way to turn books into money is to sell them to the audience. So from this moment on they try and convince them to buy the books. How? By explaining to them, in their own peculiar way, the relevance of each of Shakespeare’s plays and making the spectators enjoy the formal, literary and most beautiful fragments of Hamlet, Macbeth, Othello or Romeo and Juliet, among others.

Shakespeare in Chicago is a fun way to approach the contemporary world of Shakespeare. Because that’s what it’s all about, for students to discover the enormous timelessness of the great playwright who, despite living more than four centuries ago, continues to fascinate us with the way he personifies our human weaknesses through his characters.

The romantic and innocent love of Romeo and Juliet, the demon of jealousy in Othello, the unbridled ambition of Macbeth, the tragedy of honour and revenge in Hamlet… Shakespeare captured all human weaknesses in an unparalleled way and in an English very similar to that practised today, writing his most famous plays and sonnets using the new and creative forms of Early Modern English that we talked about at the beginning. And using, in fact, many words and grammatical structures that are still very common today. Hence their importance, and enormous influence, on the teaching of English.

In 4 scenes for 4 sessions or lesson plans

Like the other plays in the Let’s DO IT catalogue, Shakespeare in Chicago consists of four live-recorded scenes each designed, with the support of interactive activities, for a lesson plan.

Each scene and lesson plan is pedagogically designed to delve into a specific play and sample of William Shakespeare’s literary work, including all the necessary information about that particular play and its relevance within the author’s theatrical and poetic oeuvre as a whole.

Shakespeare in Chicago is also accompanied by a very complete Teacher’s Pack that further explores the figure of the author and each of the plays that appear in the scenes in order to make the most of all the opportunities offered at a didactic level to immerse oneself in the figure and dramatic work of Shakespeare.

All the original fragments or literary extracts used in Shakespeare in Chicago are to be found in the Teacher’s Pack – on audio tracks and with transcriptions in English and Spanish – so that teachers can add English Reading Comprehension practice to this motivating approach to English lessons through online theatre if they wish.

Shakespeare, available on the Let’s DO IT digital platform for students aged 14 and above

Shakespeare in Chicago is one of the four plays available in digital format on Let’s DO IT, whose collection includes The Frog Prince, Death by Haircut and Treasure Island, a new way of enjoying the theatre experience in the classroom. The Let’s DO IT! programme is made up of plays that cover all educational stages and are adapted to all levels of English, with Shakespeare in Chicago being the pedagogical resource especially designed for students in the upper years of secondary school and Baccalaureate.

Shakespeare in Chicago is the ideal way to get to know Shakespeare and his work, through the online theatre show itself and the related exercises included in the digital supplementary material. But it is also a perfect format for approaching teenagers and discussing human values and the effects of being carried away by passions, all through the author’s great characters. Finally, students will have the opportunity to talk directly with Face 2 Face artists online.

Subscribe to our newsletter and be the first to find out all about our news, promotions, events, articles…